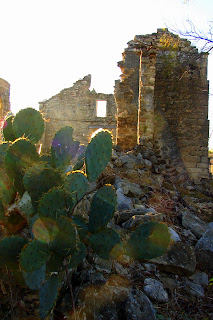 For the first time in several years I picked fresh Prickly Pear fruit. As I drove up the rural ranch road out in Uvalde County I was struck by the colorful "tunas" dotting the tops of the Prickly Pear. Considering the number of cactus plants I saw, it is no wonder I was compelled to pick 10 pounds of Prickly Pear Tunas so I could make Prickly Pear Sauce. This prickly pear sauce recipe a friend gave to me years ago. It was from a cookbook he had with old recipes from Mexico. I've also found it several times since then on websites & in several cookbooks. It can be easily increased.

The Prickly Pear fruits are very sweet/tart.  Depending on the level of ripeness the sweet factor can be more to the tart side. When I lived in Mexico the street vendors used to peel the fruits & sell bags of them for about 20 pesos.  Considering the areas I see Prickly Pear growing in Texas & across the Southwest there is no end to harvesting opportunities. Be cautious though; as I picked the fruit out in rural Uvalde County my mother mentioned that rats liked to build nests at the bottom of Prickly Pear Patches which also tend to attract snakes.  The morning I picked the fruit last Monday I noticed a nest almost 4 feet wide at the base of one of the Prickly Pear.  I was alert & walked very carefully.  Seriously, I thought: "no snake will cheat me out of a Prickly Pear Sauce".  I was also of the mindset if that proved wrong I could sprint quickly without spilling too many fruits!!

Some of the nutrients found in prickly pear cactus:
Flavonoids | Pectin | Vitamin A | Vitamin B | Vitamin C
Once peeled the Prickly Pear can be eaten either fresh, frozen, or cooked as I have into a sauce which makes a nice marinade, basis for a colorful salad dressing or my personal fave: add a colorful kick to a margarita.  The raw fruit tastes somewhere between kiwi or strawberry with a slight acidic tang.(Use gloves & tongs to handle the fresh tunas & when all else fails pick those tiny stickers out with tweezers. The times I have handled the tunas I've always had a few get into my finger tips.) 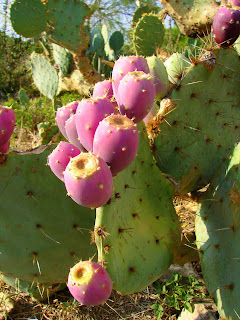 Remove rind from prickly pears by cutting off both ends and running a slice down both sides. If ripe, the rind will pull off easily. Chop prickly pear into 1-inch pieces and place in a blender. Blend on medium-high until you have a puree. Strain through a cheesecloth or a food mill, this will remove almost all of the tiny stone like seeds. Reserve both the juice and puree. Put 2 cups of the prickly pear juice in a medium-sized saucepan with the sugar. Cook over medium heat until mixture is reduced by half. Remove from heat. Add 1 cup of pureed prickly pear, the lime juice & orange (or lemon) liqueur. Stir well. Refrigerate for 4 hours before serving. **Once we reduced the sauce by half & it thickened slightely it was put into pint canning jars & processed in a water bath for 15 min.
Posted by Dee at 10:45 PM 7 comments:

One thing you need to know!

Dee
Austin, Texas, United States
I've lived both north & south of the border where family, food & celebrations are a part of life~ 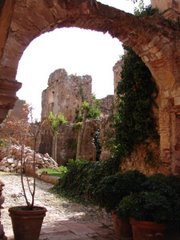 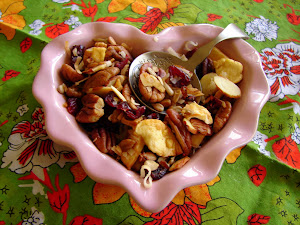 All my Blog adventures.

Songs I love or simply want you to hear!